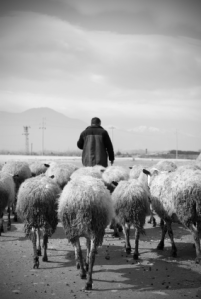 John 5:19 So Jesus said to them, “Truly, truly, I say to you, the Son can do nothing of his own accord, but only what he sees the Father doing. For whatever the Father does, that the Son does likewise.”

I don’t know if you have ever played follow the leader but when I was in the Police Academy in 2000, I was in a physical training session where for 2.5hrs my entire squad had to play follow the leader. The instructor took us through a series of gruelling exercises and drills that we were required to follow. The only way we could follow his lead was if we watched closely and heard attentively.

This is a great practical insight into leadership. Followers take their cue from the leader. As goes the leader, so goes the followers. You reproduce who you are. It’s a law built into creation (Genesis 1). You can only reproduce after your own kind. This should cause you to take your example in leadership more seriously but it should also challenge you to ask the question, ‘Am I following THE leader?’

I’m not talking about your boss, pastor, parent or spouse. I’m talking about Jesus Christ. Colossians 1:15-20 gives us one of the most exhaustive and exalting reflections on Jesus Christ, that exists in the entire bible. V18 reads, ‘He is the head of the body, the church. He is the beginning, the firstborn from the dead, that in everything he might be preeminent.’

As we consider the life of Jesus, we read in John 5:19, that he played follow the leader for 3.5 years of his ministry. Jesus said, ‘I only ever do that which I see my Father doing.’ Jesus knew that it’s not what you do that matters but what you do out of what the Father reveals to you to do. Most people I know are very busy doing a number of things that seem very important to them and possibly to others but I often wonder how much of what we do is really fuelled by a revelation from Gods heart and mind, rather than something that’s just culturally expected of us?

Even the Son of God recognised that by himself, he could do nothing. Jesus was completely reliant on his relationship with his Father and the power of the Holy Spirit at work in him and through him. Jesus only did what he saw the Father doing, which means, he had a close and intimate relationship with his Father, to actually observe and hear what his Father desired. As a result, Jesus could actually mirror his Father and authentically reflect the Father’s mind, will and intention for any given situation. Jesus took the game of follow the leader to a whole new level.

One of the most important questions you could ever ask God every moment of each day is, ‘Father, what are you saying and doing right now?’ God’s heart, mind, will and intention will be revealed to those who knock on the door of his heart and ask this simple, yet profound question.. continually. It’s time to start following the leader of our souls, Jesus Christ.